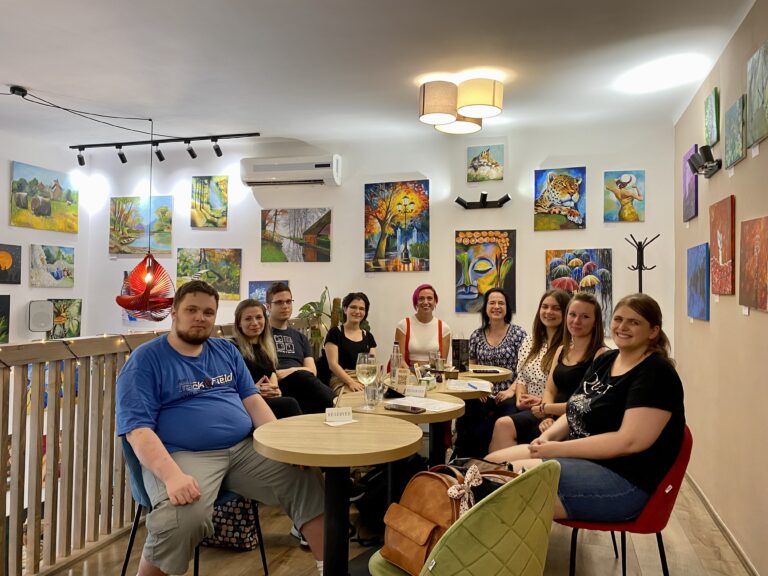 Teamwork is a crucial part of our job. We support each other not only when it comes to solving  difficult cases of airport or handling charges, but in every way we can. We work exclusively from home, and even though we have excellent communication channels and regular video meetings, the training trip to Maribor Airport earlier this year showed us how much we benefit from a live meeting – we are more confident to ask questions and every group brainstorming is smoother too.

This time in Budapest, our focus was on only meeting each other and having fun. After gathering at the train station, Petra and Anna, led the group of nine to the restaurant where we had planned to have lunch. Standing on the footpath across the restaurant, Anna revealed that before lunch, she and Petra had planned a surprise. They had booked us into an escape room!

We were divided into two groups and both teams had to solve puzzles to escape. The theme of both rooms was the same, so we could race which team would escape quicker from the Pharaoh’s Treasure rooms. This is where the main weapon we use for work could shine, in the maze of symbols and numbers we opened lock after lock with combined natural logic and teamwork, escaping the Pharaoh’s curse with ease.

After the escape room, a memory we’ll cherish forever, we headed for a restaurant just across the road. Quick lunch later, the team settled down at a pretty café nearby, where Anna had a final surprise and held a 40-question aviation quiz. A couple of hours of laughter and personal stories followed the quiz until we had to say goodbye to each other and head for the train station.

The following Monday, we welcomed each other again in the virtual office and continued our work as precisely as always, but with even more smiles.